I used the bag from The OMM ecuador on a 250-kilometer terrain in both the Andes and the Amazon. In the suitcase on my trip to Ecuador I had one larger sack which was intended during this race. But the suitcase was "messed up" and delayed to the plane at Heathrow airport and when I arrived at Quito, I had to use spare and backup equipment that I had in the hand luggage. The bag, a OMM Phantom 20 I have previously tested and it is good on my back when I run. The race I was supposed to attend was a six-day self-sufficient race, where the participants pack all the food and equipment for the whole

the ride in the bag. Usually 25 to 35 liter bags are used as long as this.
As I had to use spare and backup equipment, everything was not optimal, which meant that I had too much volume and weight that was going to be in the bag.
I spent two days compressing and reducing the weight of all compulsory equipment and food with a minimum of 14,000 calories. I did not have room for extra starters and goodies. After approval of the content of the organizer, the bag was incredibly low at 6.3 kilos. I eventually went upstairs and pushed up some extra goodies. In addition, we had 1.5 liters of water from the start. This is distributed on water bottles hanging in the shoulder straps. Then the bag was 8-9 kilos to the start of the race.
This meant that the bag - OMM Phantom 20 was stuffed stuffy and no bag is meant to be so stuffy. But considering that the bag becomes easier as the days go on, I suppose this would go well.
Already after a couple of miles the first day, I found the "bounset" a little too soft and a lot. This was because from each shoulder strap to the sack, two strings were fitted to remove jerk when running "up and down". But with this weight, the knits did not work and the bag became a little strange to run with.
In addition, the pockets that were small and placed completely bake by the sack on the belly button were difficult to get into and troublesome against the sides of the body (above the hips).

The side pockets on the side of the bag are brilliant as they provide the ability to store items that are easy to access. For example, I put the rain jacket here.

After a couple of days, volume and weight were reduced in the bag and it was optimal to run. But the backplate of the bag is soft, so it's important to pack properly to get a good surface on your back. In addition, the bag has an outer pocket at the top where I had easy access to my first aid kit. 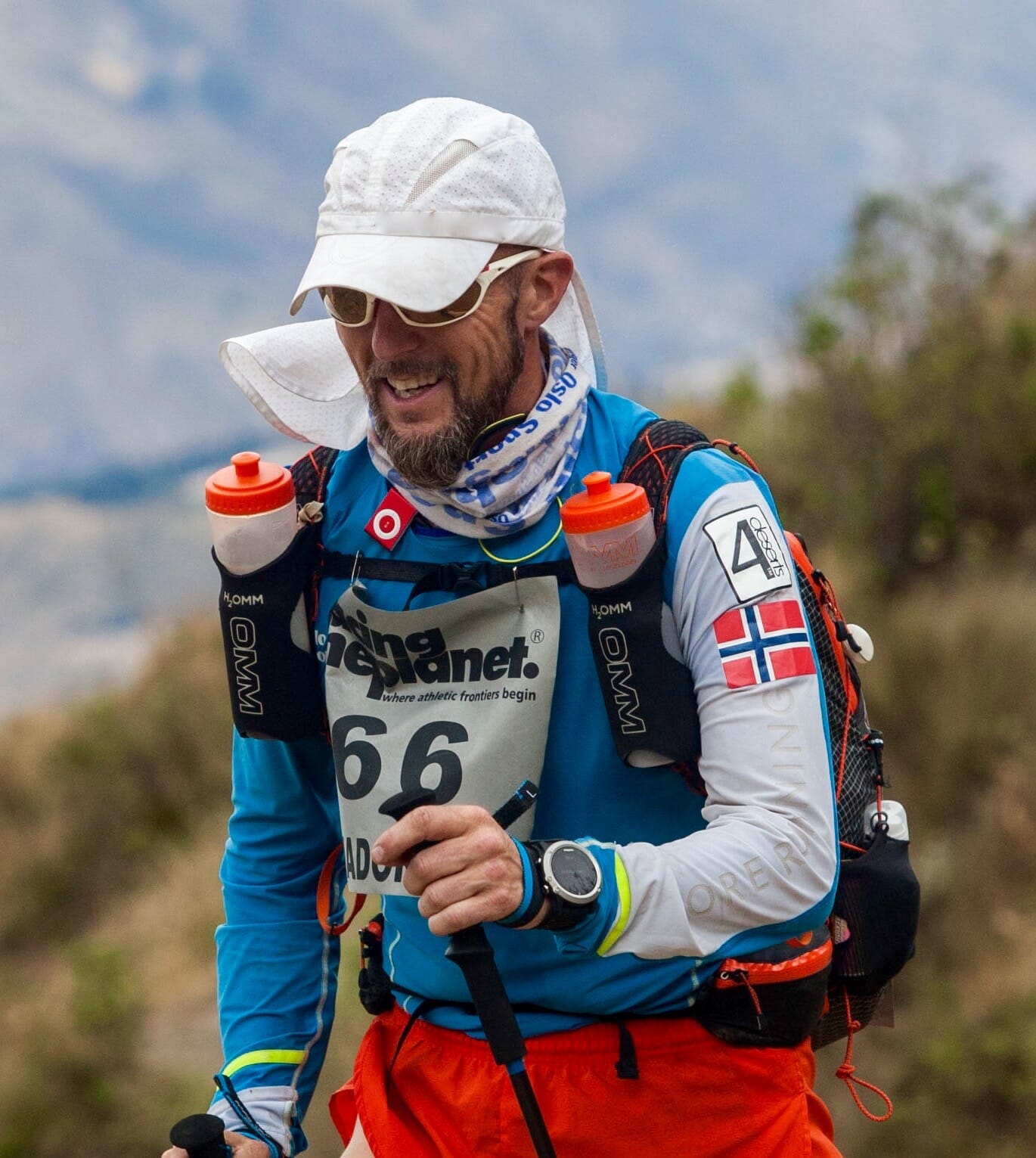 The bottles from OMM which I included was new and an improved version of bottles that I had used on earlier runs.
The bottles was unfortunately a failure. They were brand new, tight and fitting perfectly in their pockets. After running for a couple of hours and making a replenishment, I discovered that they painted and they made it to the last goal match the last day. Whatever I adjusted, they did not get tight. Probably a production error. One day I used drinking tablets containing sugar, and especially my sweater became "stiff" of the sugar lacquer. In the other days, I used my regular drink and taste setting - Tailwind which is without sugar content and escaped this problem.